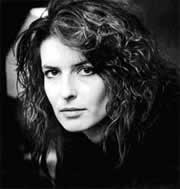 Alison Croggon was born in 1962 in Transvaal, South Africa, and has three children. Alison Croggon moved as a child to England in 1966 and to Australia in 1969, growing up near Ballarat and later moving to Melbourne. She trained as a journalist on the Melbourne Herald and her work includes poetry, plays, libretti, translations, editing, criticism, an adult novel and fantasy novels for young adults (The Riddle, The Gift). Her first book of poems, This is the Stone, was published in 1991 and won the Anne Elder and Dame Mary Gilmore Prizes that year; she has also published Pharaohs Returning and Attempts at Being (2002). Her opera The Burrow, with score by Michael Smetanin, premiered at the Perth Festival in 1994 to critical acclaim and had seasons in Sydney and Melbourne. Her play Lenz was premiered at the 1996 Melbourne Festival, produced by the Mene Mene Theatre Company. She has completed the libretto for a second opera with Michael Smetanin, Gauguin. She was poetry editor for Overland Extra (1992), Modern Writing (1992-1994) and Voices (National Library of Australia, 1996) and was founding editor of Masthead literary arts magazine. In 2003 she was the organiser of the Australian wing of Poets Against the War, collecting poems which were delivered to the Prime Minister Mr Howard in protest against the impending war against Iraq. She has received a grant from the Australia Council to write full-time in 2004 and 2005.

Alison Croggon won’t be reading any Australian poetry for the St Kilda Writers Festival. She will be reading work by the political activist Chilean poet Pablo Neruda. His work, she enthuses, is tremendously sensual and surreal.

Poets in South America are very popular. Croggon says there is poetry in every culture. But when asked about the poetry in the Australian culture she turns her head, looks up to the ceiling, looks down at the ground and says ‘Oh well...’

In 1991, Croggon created a storm as a theatre critic for The Bulletin. Carrillo Gantner, the then artistic director of The Playbox, was so incensed by her condemnation of several plays that he banned her from the Malthouse Theatre. Accusations flew, stories were written and a playwright even took legal action against her.

The Bulletin ran Gantner’s version of events next to Croggon’s under the headline Gantner v. Croggon. The poet, playwright and author was gaining notoriety, not for her work but for her judgment of others, including, such descriptions as ‘a slow lobotomy’ and ‘mercifully short’.

The Croggon view of our culture is damning. Banal. Theatre is banal. Books are banal. Inward looking. Self-referential.

Croggon glances from left to right uneasily. It’s almost like she can’t bear to think about Australia’s cultural situation. But she can talk about it easily.

‘I had to judge the Premier’s Literary Awards one year,’ she says. ‘So I read about 40 books of poems. I was in a bad mood for three months. Except for a few, I gave up reading Australian poetry a long time ago. I read all these books and I couldn’t understand why they bothered... Very inhibited, very conservative and very trapped.’

Croggon isn’t convinced about the Australian perspective and its significance. ‘What is it? What is it?’ Emigrating with her English parents from South Africa via Europe at the age of seven, she is an Australian but baulks at the continual conferencing about the ‘meaning of being an Australian’.

‘What you get in so much Australian writing is all this stuff about how Australian we are and how we have to be Australian. Instead of getting on with more interesting questions... I bet Francis Bacon never sat down wondering if he was British and what that meant.’

The dissatisfaction Croggon expresses in an almost exhausted fashion doesn’t translate in print as an unbridled joy to be dinkum. It’s not as though she has been stifled. Poetry books and novels have been published, prizes awarded, she has contributed to anthologies and written libretto for operas (most recently Lenz at last year’s Melbourne Festival).

But her willingness to articulate an artistic frustration shouldn’t be interpreted as bitter despair. It’s debate she is after. Regardless, Croggon doesn’t really care how others view her, she has like-minded friends (‘you can’t do anything on your own’) who are more interested in supporting each other than assimilating into the culture of their citizenship.

Croggon started writing poetry ‘quite seriously’ when she was 10. One of the poems in her book, This is the Stone, was written as a child.

‘There is an essential voice that carries through. But I copied everybody from Tennyson to (T.S.) Eliot. More recently, I started reading a lot of poets in translation including Neruda and a whole lot of South American, Spanish poets.’

There is a tinge of her colleague Barrie Kosky in Croggon.

Both talk in extremes with damning intellect, and they don’t soften the blows.

But with Croggon there is less theatre in the delivery. Croggon says her piece quietly, but with a righteous determination.

‘I disagree with Barrie but I admire him,’ Croggon says. ‘He was one of the very few people when all of that shit (over her reviews) was happening to get up and defend me. He is curious and interested. You don’t have to agree with what he does to think, ‘Here is someone who wants things to move and not to be this awful boring

Croggon says we live in a dishonest culture. ‘To take the criticism thing; you find to your despair that any kind of healthy public debate is completely impossible. I noticed when Barrie did his speech attacking a whole lot of things (to do with arts festivals). I read it and thought, ‘on ya Barry, you are one of the few people with the guts to talk about what is seriously wrong about the culture’. Then I saw the context in which it was published - ‘enfant terrible’... ‘isn’t it shocking what Barrie says’. It was either completely ignored or completely misrepresented.’

Bored or not, Croggon likes living in Australia - ‘my ordinary life’, she says in a self-mocking manner. But to agree that her choice is to live here doesn’t negate her objections to the state of the arts. The barrage concludes with a heartfelt lament - her view that important artists such as Les Murray and Patrick White are best known outside of their work.

‘Everybody talks about Murray’s political standpoint... seldom Murray’s poetry and why it’s interesting and exciting. He is a controversial figure. Patrick White is the same, he is a very sad example of trying to be a writer in Australia. You should be reading his novels, not who he is abusing.’

In that context we shouldn’t be reading about Alison Croggon.